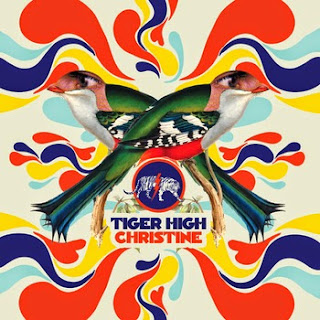 After checking out Tiger High's latest single, a split release between Trashy Creatures and Volar Records, I think I'm getting their surrealist psych cover art on this single and full length Inside the Acid Coven. If ever there was a case for the direct link between T Rex glam pop and punk power psych than this may very well be the textbook example. These four guys from Memphis with ties to Rich Reatard and Jack Oblivian have a few well received full length releases out already and have honed this special combination to a unique point. They included a couple of non-LP tracks on the B-Side which is always appreciated by those looking for MORE on these tiny records. The sole reason I started writing about the seven inch was those unreleased songs from Sebadoh or The Palace Brothers that only showed up on the B-Side's of these things. They should be a place for a band to experiment, or in this case, take their brand of glam psych to an epic place.

A-Side's "Christine" shakes in with shrill riffs and an electronic throbbing bassline that dives into a thick garage psych with swirling muted clicks and chords, delayed and bouncing across this cloud ring. There's layers of high static guitars in a choir of glam theatrics with lines about 'purple women and purple haze' teetering between a low baritone delivery and out of control yelling into the mic. This mix can't handle the way they've pushed this right into the red giving it a clear coat of static that only enhances this contact high. Going for the most bizarre solo of the year so far not giving away how they've managed to strike these strings. Meticulous attention to those guitar details creating appropriately dense and mysterious textures and this literally blows up outside the grooves with it's big ass sound.
B-Side's "More" comes out with a jagged burst of chords from warbling guitars in such a gleaming racket without a second to take any of this in, only time to get swept up in this massive sound. It's a shock and awe approach to that sweaty glitter punk sound. Like anybody else, they "want more" in that almost religious, gospel yeh-yeh sound. The vocals play with various sonic distances in the spirit of messing with their own special party psych that aims to have pounding garage come at you from all angles. Glitchy squeals and feedback fade into "Shakey Legs" with a seriously blown out organ grind in that We Will Rock You primal stomp. Harmonies layered up each step, countless vocals before the warped circuits take over the guitar signals and the digital haze clears. Clearly taking the altered consciousness sounds of the '60s and injecting spit and gravel from the punk prophets.

Get it from Trashy Creatures or Volar Records direct.